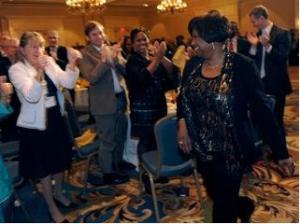 Last fall, before the PSSA test cheating scandal, before the Philadelphia School District faced a $630 million budget deficit, before the IRS audit into District financial practices and the no-bid security contract debacle with IBS Communications and the “Accountability Agreement” with the city—before politicians began proposing laws to limit her power and writing letters to the governor requesting her immediate termination—Dr. Ackerman was the best urban superintendent in the country.

“Arlene Ackerman is one of the best big-city school superintendents in the country and is most worthy of the nation’s highest individual award in urban education,” said Council Executive Director Michael Casserly in a press release dated 10/21/10. “She is smart, dedicated, innovative, effective, and completely committed to our urban schoolchildren. Our sincere congratulations.”

In a testimonial video presented at the award ceremony (which took place while the federal government was conducting a civil-rights inquiry into racial violence against Asian students at South Philadelphia High School), the City and School District also spoke Dr. Ackerman’s praises.

“The city of Philadelphia has benefited greatly from Dr. Arlene Ackerman’s courageous leadership,” Mayor Michael Nutter said.  “She has shown remarkable dedication to our city’s students and families and has given renewed hope to all of us by showing us just how truly great we can be.”

School Reform Commission Chairman Robert Archie said, “Congratulations, Dr. Ackerman, on being the recipient of this award.  Through your leadership qualities, the School District of Philadelphia has been transformed into one of the best in the United States.”

“Dr. Ackerman is a strong woman of faith,” said Dr. Kevin R. Johnson, Senior Pastor, Bright Hope Baptist Church.  “And like Esther in the Bible, I believe that God has sent her to Philadelphia for such a time as this.”

These words, and this award, ten months ago today.