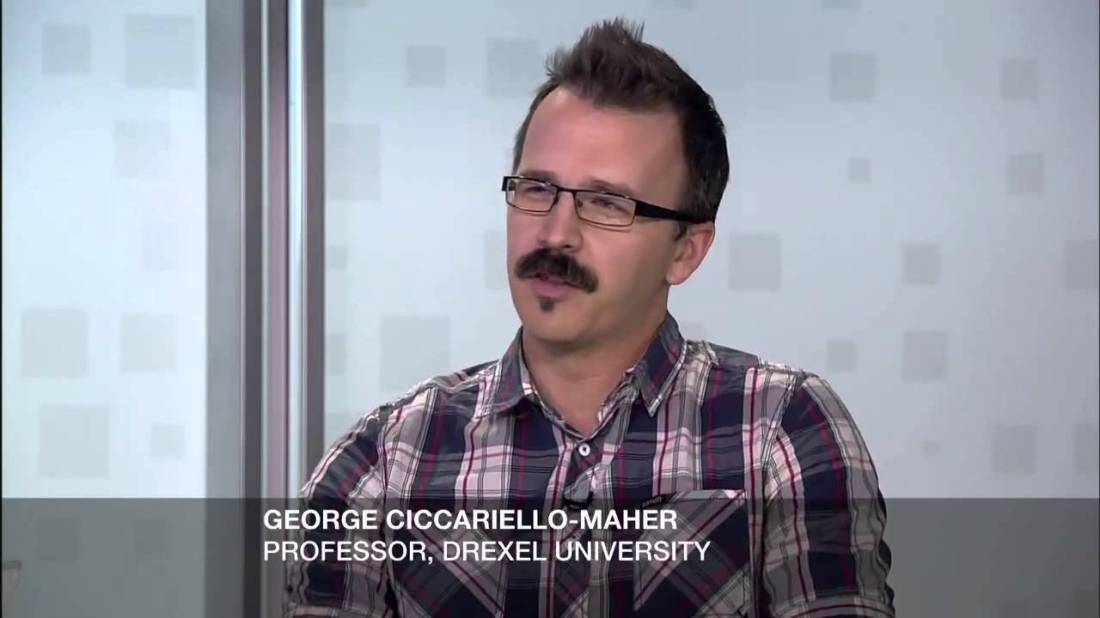 On Christmas Eve, at 10:48 PM, Drexel University Associate Professor Ciccariello-Maher tweeted his 11,000 followers: “All I Want for Christmas is White Genocide.”

On Christmas morning the next day, at 11:53 AM, he followed up with another tweet: “To clarify: when the whites were massacred during the Haitian Revolution, that was a good thing indeed.”

Not exactly the kind of tweet that will keep Drexel on U.S. News & World Report’s Best Engineering School’s list, but carefully worded and carefully timed for maximum publicity nonetheless.

Not surprisingly, Drexel issued an official statement on Christmas night addressing Ciccariello-Maher’s inflammatory tweets, saying they were “utterly reprehensible, deeply disturbing, and do not in any way reflect the values of the university.” Drexel also said they were taking the situation “very seriously,” and that they contacted Ciccariello-Maher “to discuss the matter in detail.”

What was Ciccariello-Maher’s response? He published a statement claiming the tweet was satire, just an inside joke to mock America’s real racists and white supremacists:

On Christmas Eve, I sent a satirical tweet about an imaginary concept, “white genocide.” For those who haven’t bothered to do their research, “white genocide” is an idea invented by white supremacists and used to denounce everything from interracial relationships to multicultural policies (and most recently, against a tweet by State Farm Insurance). It is a figment of the racist imagination, it should be mocked, and I’m glad to have mocked it.

Ciccariello-Maher wasn’t sorry or sad, but glad. Glad to have mocked it.

My question is (and I’m sure Drexel has the same question), what exactly is Ciccariello-Maher mocking? That the phrase “white genocide” is a concept invented by white supremacists to denounce multiculturalism? That’s what’s being mocked? That’s the big joke?

I guess I’m not hip to radical, left-wing code phrases, because the joke just isn’t that funny. Especially when you tweet it at 10:48 PM on Christmas Eve, a time when most people, regardless of their race or religion, are putting presents under the Christmas tree, or are at least spending quality time with their family.

Hey, dad! Can I open one present before I go to bed? Please!

No, son. I’m too busy tweeting out jokes about white genocide to all my students and Twitter followers.

But Ciccariello-Maher’s “joke” still doesn’t adequately explain his follow-up tweet on Christmas morning that celebrated whites being massacred during the Haitian Revolution, stating that it “was a good thing indeed.” Slate Magazine tried to connect the dots for Ciccariello, writing, “it seems clear that he was tweaking white supremacists for their repurposing of the term white genocide, which is disingenuously invoked nowadays to pretend that uncontroversial things like interracial dating are as threatening as the slaughter that took place in Haiti in 1804.”

Really? That’s the second punch line? An inference that white supremacists misuse the term white genocide? How is this funny? How is this an appropriate tweet on Christmas morning? The answer is that it’s not. Massacring humans, white or otherwise, isn’t a good thing. But if you look really closely at what Ciccariello-Maher is stating in his second tweet, he’s saying it is a good thing.

The Slate Magazine defense is smokescreen. According to Ciccariello-Maher, there are two kinds of “white genocide,” the real kind (like in Haiti in 1804), and the fake kind (multiculturalism threatening white culture). And which is the good kind? Why, the former, of course. Ciccariello-Maher made this abundantly clear in his Christmas day tweet: “To clarify: when the whites were massacred during the Haitian Revolution, that was a good thing indeed.”

How is this satirical? It’s not. And Ciccariello-Maher still hasn’t adequately explained this.

Drexel has a real problem on its hands. They have a professor who’s condoning violence against an entire group of people, and doing it on a national holiday—not sending out seasons greetings, but ranting about racism and white supremacy like a wild-eyed, 21st century John Brown; all Ciccariello-Maher needs is a broadsword and he can start hacking people up.

“I teach regularly on the history of genocidal practices like colonialism and slavery—genocides carried out by the very same kind of violent racists who are smearing me today,” Ciccariello-Maher went on to state in his statement, apparently referring to the firestorm of reactions his inflammatory tweets provoked. “That violent racism will now have a voice in the White House is truly frightening—I am not the first and I won’t be the last to be harassed and threatened by Bannon, Trump, and co.”

Do you see the irony here? Ciccariello-Maher’s notion that “violent racism will now have a voice in the White House” is just as equally imaginary as white supremacists’ idea of “white genocide” that Ciccariello-Maher rails against. Just because a small fraction of Trump’s supporters are extremists, doesn’t mean they will have any connection to the White House.

Now if I thought like Ciccariello-Maher does (thank God I do not), I might, as a joke, tweet out a satirical message on New Year’s Eve saying something like, “All I Want for the New Year is Violent Racism in the White House.”

That would be funny, wouldn’t it? Really satirical.

As a follow-up, on New Year’s Day, I could also tweet, “To clarify: when all the black slaves were beaten, raped, and killed before the Civil War, that was a good thing indeed.”

Do you see why this deserves to be mocked, according to the Drexel professor’s warped logic? Because Ciccariello-Maher repurposes the term “violent racism in the White House,” which is disingenuously invoked nowadays by radical leftists to pretend that uncontroversial things like Steve Bannon being Trump’s senior advisor are as threatening as pre-Civil War slavery.

What I am not glad about is that this satirical tweet became fodder for online white supremacists to systematically harass me and my employer, Drexel University. Beginning with Breitbart.com—formerly the domain of Special Counselor to the President-Elect, Steve Bannon—and running through the depths of Reddit discussion boards, a coordinated smear campaign was orchestrated to send mass tweets and emails to myself, my employer, and my colleagues. I have received hundreds of death threats.

So what should Drexel do about the position Ciccariello-Maher has put them in? It’s obvious Ciccariello-Maher is too proud and too self-righteous for any self reflection. It’s obvious that the mass tweets, and emails, and death threats Ciccariello-Maher and his colleagues at Drexel University have received are in no way any fault of his own. And as for Drexel’s official statement calling his tweets “reprehensible” and “disturbing,” well, Drexel must be too dumb to understand the joke.

“Drexel University issued a statement on the matter, apparently without understanding either the content or the context of the tweets,” Ciccariello-Maher said in his statement. “While Drexel has been nothing but supportive in the past, this statement is worrying.”

Ciccariello-Maher continued: “On the university level, moreover, this statement—despite a tepid defense of free speech—sends a chilling message and sets a frightening precedent. It exposes untenured and temporary faculty not only to internal disciplinary scrutiny, but equally importantly, it encourages harassment as an effective means to impact university policies.”

Loose translation: it’s unfair that associate professors must be subjected to disciplinary scrutiny when their highly unprofessional, highly inappropriate tweets (though carefully worded and timed for optimal publicity), cause the reputation of an entire school and it’s staff to be dragged through the mud. It’s unfair that a radical, self-proclaimed communist professor with a history of racist tweets and an unhealthy obsession with white supremacy, can’t tweet out his racist, white supremacist view of the world on Christmas Eve and Christmas day without any blowback from his bosses who sign his paycheck.

Boo-hoo. Life is so hard for a white-privileged, elitist, American man with a PhD in Political Science from the University of California at Berkeley.

Hey Drexel University—you don’t need this garbage. Despite the old adage, all publicity isn’t necessarily good publicity. A university specializing in math and science, a school with a prestigious engineering program, doesn’t need to delve into the swamp of radical left-wing agitprop.

So Drexel, if you’re reading this, you must demand an apology from Ciccariello-Maher. A sincere apology, not just to the university and its staff, but to the public at large. Ciccariello-Maher needs to realize that white genocide isn’t a funny Christmas Eve anecdote, and that his obsession with white supremacy is toxic and disturbing. If he doubts this reality, ask him to open his eyes and look at the turmoil he’s brought to the entire community of Drexel University.