“The Philadelphia School District’s zero-tolerance discipline policy is having a ‘devastating’ effect on students, particularly minorities, according to a recent report by Youth United for Change, the Advancement Project, and the Education Law Center. The authors of the report claim that students are punished too harshly for minor infractions, which makes city schools less safe and lowers students’ academic performance.

A quick look at the district’s Code of Student Conduct, however, shows that by most standards, it’s quite tolerant.”

This is an excerpt from my commentary in today’s Philadelphia Inquirer, “Less than ‘zero tolerance'”.  Please click here to read the entire article.  You can respond or provide feedback by clicking on the comment button below. 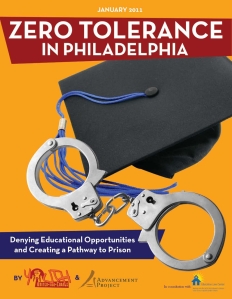 These are just three of the many outrageous conclusions drawn in Youth United for Change’s recent report entitled Zero Tolerance in Philadelphia: Denying Educational Opportunities and Creating a Pathway to Prison.  In a nutshell, the study absolves chronic rule-breakers of basic responsibility for their own behavior and portrays violent and unruly students as powerless victims caught in an oppressive disciplinary system.

Perhaps the most troubling aspect of this “report” is its methodology.  As its authors noted on more than one occasion in the study, the Philadelphia School District did not release the actual case records detailing the causes behind student suspensions, expulsions, arrests, and referrals to alternative school placements; much of this information is protected under state privacy laws.

So without any hard data or actual facts on the reasons why students were disciplined in the first place, United Youth for Change, in conjunction with the Advancement Project and the Education Law Center, piecemealed their report together by surveying several hundred random Philadelphia school students; they did not adequately consult school administrators, or disciplinarians, or anyone with objective firsthand knowledge of district discipline policies.

Interestingly, a number of the students interviewed just happened to be the very disgruntled rule-breakers facing discipline actions by the district.  More disturbing was the fact that some of the students who provided testimony for the study were actually YUC members!  Talk about having zero regard for research ethics and integrity.

Tragically, what the YUC report doesn’t reveal is that the true victims in this situation (other than the YUC members who’ve been indoctrinated by unscrupulous adults) are the cooperative students who make-up 85 to 90 percent of Philadelphia public schools, those diligent, hard-working students whose educations get compromised on a daily basis by the violent and disruptive actions of the incorrigible few.

The question is, who’s looking out for their rights?  Who’s teaching these children that in order to become truly empowered, they must become drivers on the road of life and not get tricked into remaining powerless passengers?

Apparently, no one associated with YUC or this unethical, misguided report.