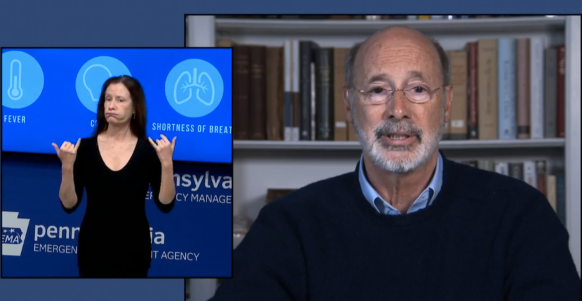 Earlier this week, the Pennsylvania State Senate passed a bill that overrode Governor Wolf’s lockdown order, which if signed, would allow all businesses to reopen within federal safety parameters.

According to The Hill, Senate Bill 613 “would require the governor’s office to align with federal guidelines in determining which businesses will be allowed to reopen during the pandemic, allowing all those that can safely operate with mitigation strategies under Centers for Disease Control and Prevention and Cybersecurity and Infrastructure Security Agency guidelines.”

Republican senators who supported the bill argued it would provide transparency and clarity in determining which businesses can be open and require them to operate in a safe manner. They said Wolf’s list of life-sustaining businesses and accompanying waiver process was confusing, chaotic and showed favoritism.

Senate Bill 613, coupled with Senate Bill 327, would give county officials the power to decide when businesses in their county would reopen. A look at coronavirus cases in Pennsylvania shows that the outbreak in the state resembles the outbreak in the nation, and that the “coasts”— Pittsburgh on the west and Philadelphia on the east—are serving to handcuff the entire state, much the same way New York and Washington are handcuffing the entire country.

In fact, the entire middle region of Pennsylvania has been minimally affect by COVID-19, yet the businesses in these 50 counties are being suffocated because of the outbreaks in a handful of “coastal” counties. Obviously, life is precious and even a single death is one too many, and any reopening of a business should be done safely and with caution. (With that said, there’s no direct evidence that lockdowns are definitively working, and government lab tests show that coronavirus is destroyed by sunlight and high humidity, which could make the virus a thing of the past very soon.)

Still, Governor Wolf plans to veto Senate Bill 613, holding firm to his lockdown order. State Health Secretary Dr. Rachel Levine wrote in a letter, “While the governor and I are as eager as anyone to begin getting people back to work, doing so prematurely will only increase the spread of the virus, further lengthening associated economic challenges, while also placing more lives at risk.”

But the businesses in the 50 counties between Pittsburgh and Philadelphia are not at risk, as the data shows. COVID-19 cases are minimal here, and deaths are almost nonexistent. What is on the rise, however, are depression, suicide, opioid abuse, and the life crushing realities of losing everything through the closing of businesses (there have been 1.2 million unemployment claims in PA since March 14), and loss of all income. People are losing their livelihoods, and can no longer feed their families.

Unfortunately, the issue of reopening the economy has broken along political lines, with free-market conservatives calling for a safe yet expedited lifting of the lockdown, and more socialist-minded liberals advocating a prolonged closure, insisting that, as one Facebook meme read, If you prioritize the economy over saving people’s lives, then you never get to call yourself ‘pro-life’ ever again.

This crisis doesn’t have to be one-size-fits-all, and you needn’t throw the baby out with the bathwater, to use a cliché. Opening the economy is also saving lives, as noted above, yet to do so recklessly doesn’t help anyone. Going back to business as usual overnight isn’t advisable, but neither is cancelling all festivals and large events for the remainder of 2020, as New Orleans Mayor LaToya Cantrell recommends.

Which is why Philadelphia schoolteachers should support reopening Pennsylvania safely yet expeditiously, and why they should call for Governor Wolf to sign Senate Bill 613. This isn’t putting profit over people’s lives, but striking a balance between a suffocating total state lockdown and a willy-nilly return to business as usual. The Philadelphia School District will undoubtedly be hurt financially by the crumbling economy, and as Dr. Hite has acknowledged in his April 13th “Message from the Superintendent,” there is the potential to lose significant funding in the coming school year, which is why he’s already put a hiring freeze on central office positions.

The contract between the Philadelphia Federation of Teachers and the Philadelphia School District is up on August 31, 2020, and the longer Pennsylvania remains locked down, the tighter finances will be four months from now. This doesn’t only affect things like teacher salary and benefits—which will undoubtedly be impacted by the prolonged shutdown—but will also affect our education community for the coming school year, and the availability of funds for things like lower class sizes, books and technology, building renovations, and other important resources.

Philadelphia School District funding greatly depends on money from the state, and the state greatly depends on a functioning economy. When the economy tanks, we all tank, which is why the squabbling between political parties must end, and a common goal of safely opening Pennsylvania must become the priority—and it must happen sooner rather than later.